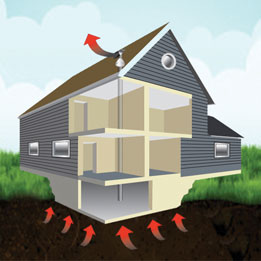 Radon is a colorless, odorless gas that forms naturally from the radioactive decay of Uranium in rock, soil, and water. When radon gas is formed, it migrates through the soil to the air above, and can become concentrated at unhealthy levels inside buildings.

Radon is a colorless, odorless and tasteless gas that is undetectable by the human senses. It is a naturally occurring radioactive gas found in soil throughout the world. It is formed from the decay of uranium, a metal elemental component in granite and shale deposits. Areas of granite containing uranium can be found throughout Oregon and Washington with concentration levels differing from place to place.

If a building is situated above soil with high concentrations of radon, pressure differences create a vacuum that draws the gas up from the soil and into the enclosed living space. Some of the pressure differences that contribute to this effect include the stack effect from heating,environmental factors such as rain, wind and falling barometric pressures, and, the use of exhaust systems. The most common cause, the stack effect, is created when indoor air is heated, causing it to rise and exfiltrate through the upper portion of the dwelling. Due to this temperature-induced pressure differential, radon entry rates are higher in the winter.

There are several common pathways through which radon can enter the living space from the soil below:

Radon is by far the greatest single source of radiation to the general public. The 2005 Surgeon General’s advisory on radon states that radon gas in the indoor air of America’s homes poses a serious health risk. More than 20,000 Americans die of radon related lung cancer every year.

When radon is present in the home or workplace, the harmful gas and its decay products are taken into the lungs without any obvious initial effect. Despite this initial subtlety, radon is known to be a harmful carcinogen. There is clear evidence that breathing radon and its decay products can lead to lung cancer. There are approximately 22,000 lung cancer deaths per year attributed to radon exposure.

Millions of homes in the United States have elevated radon levels. The first step to protect your family from radon is to have your home tested to find out if you’re being exposed to elevated levels. If elevated levels are found, there are mitigation systems that can be installed to minimize exposure to radon.

Click the image below for a downloadable and printable overview of our radon services. 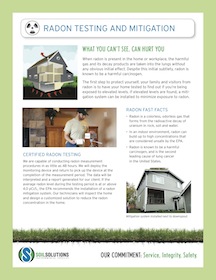